Democracy in the digital era & the threat to privacy & individual freedoms

The 133rd Assembly of the Inter-Parliamentary Union,

(2) Also recalling the United Nations Guiding Principles on Business and Human Rights, and bearing in mind that civil society can play a central role in either enhancing or diminishing the enjoyment of human rights, especially the right to privacy and freedom of expression in the digital era,

(4) Also acknowledging that, in the area of digital surveillance, adequate national legislation and enforcement is lacking, procedural safeguards are sometimes weak and oversight ineffective,

(5) Expressing concern that mass surveillance programmes regarding e-mail communications and other forms of digital expression constitute interference with individuals’ right to privacy,

(6) Acknowledging the need for the empowerment of individual parliamentarians when dealing with the protection of human rights and violations thereof,

(7) Affirming the responsibility of parliaments to establish a comprehensive legal framework and exercise effective oversight of the actions of government agencies and/or surveillance agencies acting on their behalf, and to ensure accountability for all violations of human rights and individual freedoms,

(8) Expressing the need to include and consult with both civil society groups and the private sector in policy-making related to the digital era,- 2 – C-III/133/DR

(9) Acknowledging the importance and expertise of non-governmental organizations (NGOs) and human rights advocates and their role in oversight, consultation, policy-making and awareness-raising and welcoming greater cooperation between them, parliaments and parliamentarians worldwide,

(10) Acknowledging with appreciation the work and contribution of these entities, such as the International Principles on the Application of Human Rights to Communications Surveillance (the Necessary and Proportionate Principles), endorsed by more than 400 NGOs and the Global Network Initiative,

(11) Affirming the need for secure and uncompromised systems of communication for the public good and the protection of basic rights,

(12) Considering the findings of the report of the UN Special Rapporteur on the promotion and protection of the right to freedom of expression, on the use of encryption and anonymity,

(13) Recognizing the contribution of parliaments to, and their impact on, decisions promoting the national and international consensus needed for concerted and effective action on these issues,

1. Calls on parliaments to review their national frameworks and State practices with a view to promoting and increasing the possibilities for civilian participation in the digital era, free exchange of information and ideas and equal access to the Internet and, with a view to enhancing democracy in the 21st century, encourages parliaments to remove all legal limitations on free speech and flow of information and to uphold the principle of Net neutrality;

2. Urges parliaments to carefully review national laws and the practices of government agencies and/or surveillance organizations acting on their behalf so as to make sure they comply with international law and human rights, especially as they relate to the right to privacy, and calls on parliaments to guarantee, as part of that review, that private companies will not be forced to collaborate with the authorities on practices that impair their customers’ human rights;

3. Calls on parliaments to ensure that the national legal frameworks comply fully with international human rights law when applied to interception, analysis, collection and commercial use of data and to share reviews and information from individual States and the IPU on related cases;

4. Urges parliaments to prohibit the interception, collection or analysis of personal data without the informed consent of the individuals concerned or a valid order granted by an independent court on grounds of reasonable suspicion of the targets’ involvement in criminal activity;

6. Calls on parliaments to enact comprehensive legislation on data protection, for both the public and private sector, providing, at the minimum, for strict conditions for permission to intercept, collect and analyse data, clear and precise limitations on the use of intercepted and collected data and security measures for the safest possible preservation, anonymity and proper and permanent destruction of data; and recommends the establishment of independent and effective national data-protection bodies with the necessary power to review practices and address complaints, while further urging parliaments to ensure that their national legal frameworks on data protection are in full compliance with international law and human rights, making sure that the same rights apply to both offline and online activities;

7. Also calls on parliaments to ensure through legal means that both voluntary and forced collaboration on various surveillance programmes between governments and private companies is made public and transparent; also calls on national parliaments and governments to encourage the private technology sector to honour its obligations to respect human rights, bearing in mind the Guiding Principles on Human Rights and Business, as customers of these companies must be fully informed of how their data is being gathered, stored, used and shared with others, and further calls on parliaments to promote global norms on user agreements and further development of user-friendly data-protection techniques countering all threats to Internet security;

8. Underscores that all legislation in the field of surveillance, privacy and personal data must be based on the principles of legality, transparency, proportionality, necessity and the rule of law;

9. Anticipates that parliaments will play a key role in specifying, in relative detail, the circumstances under which any interference with the right to privacy may be permitted and in establishing strict judicial procedures to authorize communications surveillance and to monitor their implementation, limits on the duration of surveillance, security and storage of the data collected and safeguards against abuse;

11. Strongly urges parliaments to review and establish new, comprehensive and independent oversight mechanisms where needed and include them in the legal framework; stresses that parliaments must investigate any shortcomings in their oversight function and the reasons behind them, making sure that their oversight bodies, such as parliamentary committees and parliamentary ombudsmen, have sufficient resources, proper authorizations and the requisite authority to review and publicly report on the actions of government agencies and/or surveillance agencies acting on their behalf;

12. Calls on parliaments to acknowledge that civil society can play a vital role in overseeing the executive branch and encourages parliaments and parliamentarians to promote and engage in consultation and to welcome assistance from civil society, NGOs and human rights advocates, in their oversight, policy-making and policy implementation efforts;

13. Strongly recommends that parliaments, as part of their oversight function, enact coherent and comprehensive legislation on the protection of whistleblowers in line with international standards and best practices;

14. Calls on parliaments to uphold both governmental and corporate accountability for violations of human rights, such as the right to privacy, freedom of expression and other individual freedoms, whereby such accountability includes adequate sanctions to ensure justice and act as a deterrent, including criminal prosecution, administrative fines, suspension or withdrawal of business licences, and the payment of reparation to individuals for harm caused;

15. Underscores the right to effective remedy for victims of violations of the right to privacy and other individual freedoms and calls on parliaments to ensure procedural safeguards in law, thereby facilitating access to duly implemented remedies; 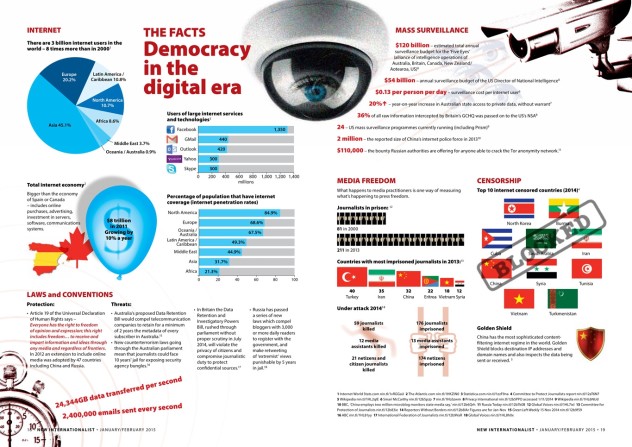