21st of October, the Inter-parliamentary Union’s General Assembly in Geneva will adopt a new resolution which is a fusion of various important global resolutions and action plans in recent times. The resolution is entitled Democracy in the Digital era & the Threat to Privacy & Individual Freedoms, sponsored by the Icelandic Digital Rights Activist and Parliamentarian Birgitta Jonsdottir and South Korean Parliamentarian Jhun Ha-jin.

When the whistleblower Edward Snowden brought to light the tightly woven network of mass surveillance by both governmental agencies and private corporations. Since Snowden’s revelations, civil society organizations and privacy advocates have called for a swift strengthening of laws, both locally and globally. The IPU represents the perfect platform to discuss and adopt solutions to these borderless issues: A forum where parliamentarians from every corner of the world work together across geopolitical and party lines.

What does the resolution call for?

The draft resolution to be presented at IPU’s general assembly is a direct response to the systemic violations of individuals’ right to privacy. It asks parliaments around the world to restore and rebuild efficient safeguards and oversight mechanisms, to bring back democratic accountability ensuring that governments comply with international human rights law and civil rights.

Despite the fact that the right to privacy is adequately covered in international treaties and international bodies, a significant gap nevertheless remains between the norms set out in international law and practice at the national level. It is now up to the world’s parliaments and individual parliamentarians to call for the changes addressed in order to respect and protect human rights in practice. This resolution offers the tools and methods to carry this out.

All countries at the IPU can send in suggestions to amend this resolution. I hope they will offer suggestions to strengthen it, not to weaken it, for surely those attending the IPU should be inspired to bolster the foundations of democracy itself during these times of transformation.

“This resolution clearly defines the risks of unchecked surveillance and spells out how parliaments and parliamentarians can contain it.”

“Representative democracy must be accountable for government policies and conduct and must therefore have the appropriate means and instruments to step in when governments and its institutions have run amok.”

Birgitta Jónsdóttir, Poetician, activist & a member of the Icelandic Parliament for the Pirate Party, Chairperson of the International Modern Media Institute; IMMI

“The draft resolution sends a strong and important message that gross and systematic violations of human rights in the digital environment, as revealed by Edward Snowden, are unacceptable. It is therefore of significant political value, encouraging respect for privacy rights and fundamental freedoms around the globe.” 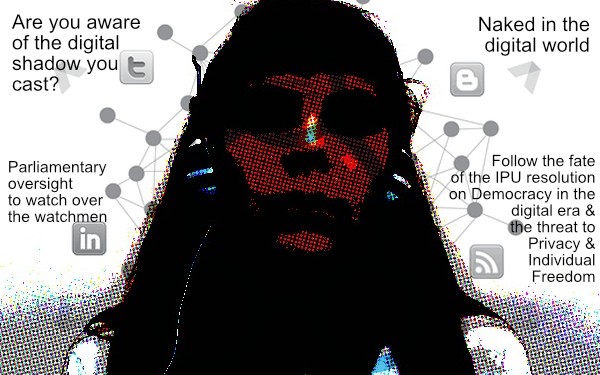